The difference between Observations & Close Calls

Learn about the difference between Observations and Close Calls. 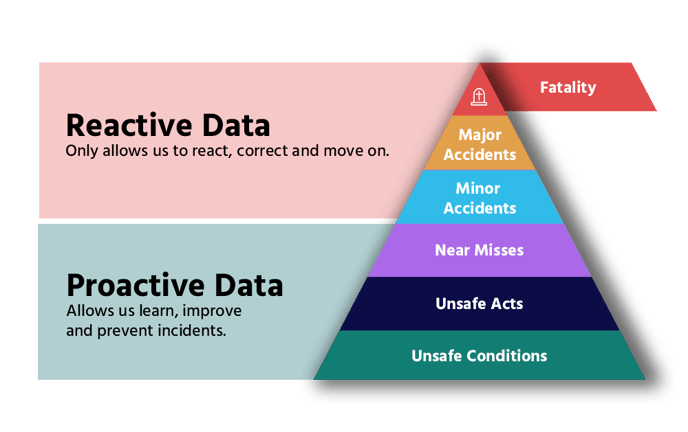 In order to understand the difference between observations and close calls, it is important to understand why both report types matter. To illustrate this, we present to you the Safety Triangle. Similar to the accident triangle, or Heinrich's triangle, it is a theory of incident prevention. It shows a relationship between major accidents, minor accidents, near misses, unsafe acts, and unsafe conditions and proposes that if the number of unsafe conditions or acts is reduced then there will be a corresponding fall in the number of major accidents.

Observations are a quick and easy way to document an unsafe condition, action, defect, or flawed piece of equipment. By reporting these items in Sospes you can actively prevent an unfortunate event from occurring.

When a company's safety culture includes encouragement and recognition for employees who see something, say something, and do something to prevent events from occurring, then you are on your way to a culture of safety.

Reporting observations are the perfect complement to any behavior-based safety program by allowing users to identify four different types of reports:

A close call or near miss is an unplanned event that did not result in injury, illness, or damage - but had the potential to do so.

Take, for example, a missing hazard label. The missing label itself is not a near miss, but if an employee is nearly injured by the improperly labeled substance, the event would be considered a near miss.

A near miss report should lead to hazard resolution and preventative measures. However, if the event isn’t reported or addressed, a serious injury could easily result—possibly only hours later—from the same or similar circumstances.

How many times have you heard that in your career? Chances are, just reading that sentence conjures a vivid memory of a workplace occurrence you’ve seen that could have been catastrophic. Safety professionals know these events by many names: close call, near hit, narrow escape, near-collision, near miss, or the colloquial “close shave” or “squeaker.” As if that’s not enough ambiguity for such an important safety indicator, there’s another term for this—frequently cited in safety circles—known as “good catch.”